The collapse of the Ottoman Empire set off a mad scramble for territory. No one paid any attention to what the people who actually lived in the former empire actually wanted. But in the heart of Anatolia, one Turkish general was determined to preserve his homeland. In 1914, the Ottoman Empire stretched from the border of Europe all the way to the Arabian Peninsula, although the amount of control actually exerted by Istanbul diminished with distance from the capital. The Gallipoli Campaign was a British strategy to attack the Central Powers from the southeast. The first step was to conquer the Dardanelles, the waterway that connects the Mediterranean with the Black Sea. The British assumed the weakened Ottoman army would provide little resistance. But under the leadership of Mustafa Kemal, the Ottomans mounted a spirited defense and drove off the Allied troops.

This is an image of ANZAC Cove, where Australian and New Zealand troops, who bore the brunt of the invasion attempt, were headquartered. Lieutenant Colonel Mustafa Kemal became a national hero and the savior of Gallipoli. The Arab Revolt was a British-backed campaign of Bedouin troops to overthrow the Ottomans. Through daring raids, railroad attacks, and desert marches, the Arabs forced the Ottomans out of territory from the Arabian Peninsula all the way to Syria. In the Mesopotamian Campaign, British troops conquered modern-day Iraq, marching into Baghdad in 1917. This photo depicts British units parading through the city. Note that many of them were Indian soldiers, likely Sikhs from Punjab. When Russia moved south through the Caucasus into Turkey, the Turks believed that Armenians were aiding them. In retribution, the Turks carried out a brutal campaign of ethnic cleansing that killed, according to Armenian accounts, 1.5 million people. Photographed here are Armenian refugees at a Red Cross camp outside of Jerusalem. The Kurds live in a mountainous territory that overlaps the boundaries of today's Turkey, Iraq, and Syria. The Kurdish nationalist movement was in its infancy in 1919 and found it difficult to achieve international support for its aims. The British promised a lot of people a lot of things during the war, and most of those promises were incompatible. This map shows one proposed post-war configuration, with an independent Armenia and France in control of southern Turkey, northern Syria, and Lebanon. British Foreign Secretary Arthur Balfour issued a declaration in support of the creation of a Jewish homeland in Palestine in 1917. This was a monumental step toward the eventual creation of the state of Israel--and prompted protests and riots among Palestinians. 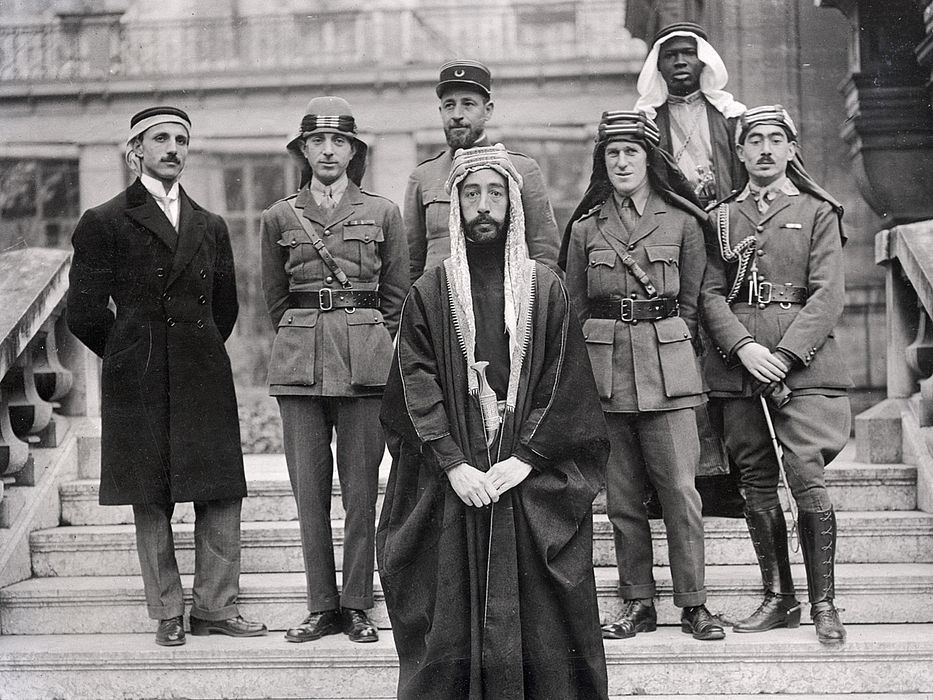 Prince Faisal, who expected to become King of Syria, invited himself to the Paris Peace Conference to plead his cause. Lawrence of Arabia, third from right, accompanied him as a translator and guide. They were very definitely not wanted. 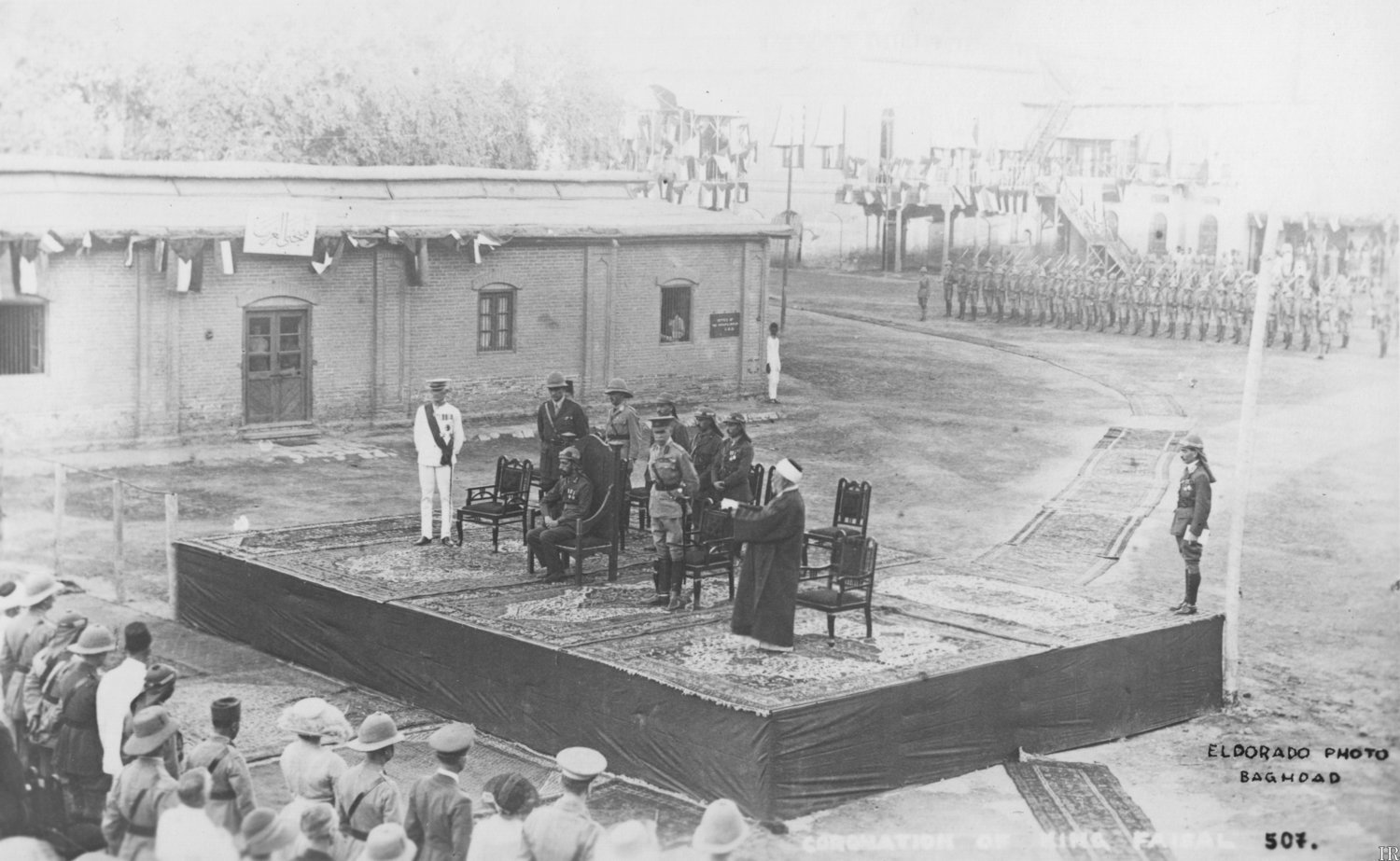 Faisal was later crowned King of the new Iraq. This is a rare photo of the ceremony. Notice that Faisal is surrounded by British military officers, a sight that would not have reassured Iraqis worried about the independence of their new country. 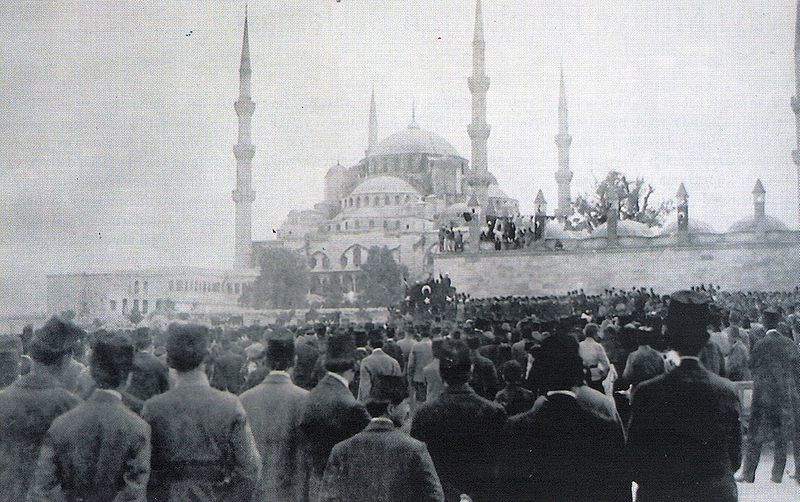 Greek troops invaded Turkey in 1919, prompting a furious reaction. This is a photo of protests in Istanbul--notice Haghia Sophia in the background. 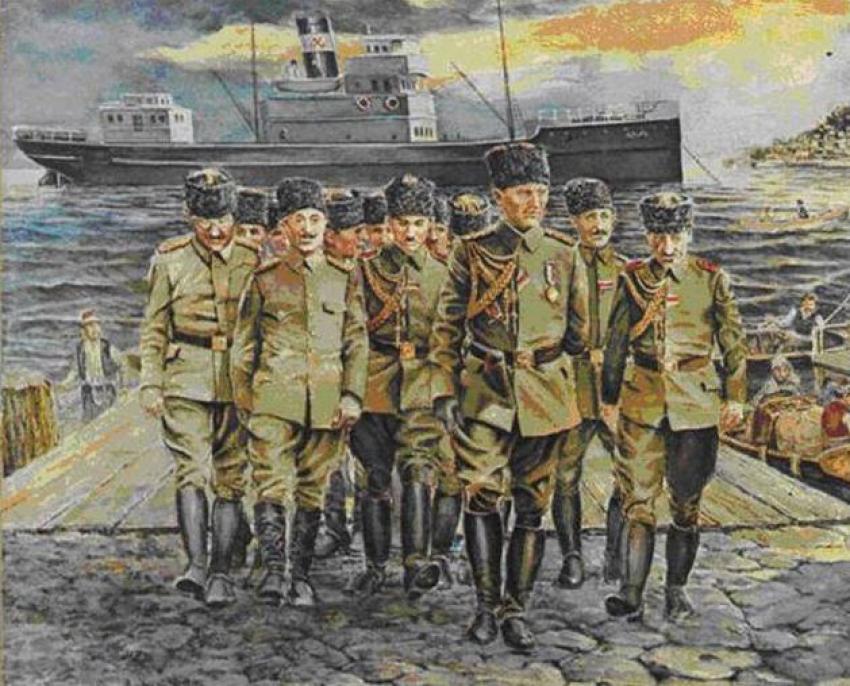 Mustafa Kemal did more than protest. He headed to the Anatolian heartland with a core group of army officers and began organizing the Turkish War of Independence. His arrival in the city of Samsun on May 19, 1919 is a day of celebration in Turkey. This is an artist's depiction of Kemal's arrival. The Treaty of Sevres captured on paper the reality that Britain was attempting to establish on the ground. Notice the independent Armenia in the east and the French Mandate in Syria. Italians were granted a zone in southern Turkey and Greeks in the south and west. On paper, the Zone of the Straits was to be an international territory supervised by the League of Nations; on the ground, the Greeks were in charge. 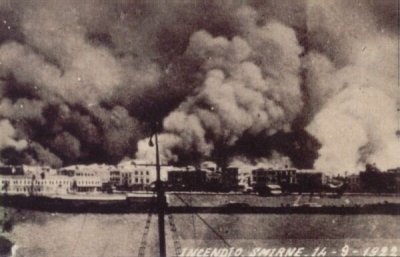 Kemal's troops steadily advanced on the Greeks, pushing hundreds of thousands of Greek refugees before them. Something like a million Greeks and Armenians were crowded into the Greek headquarter city of Smyrna when Kemal's forces arrived in September 1922. Fire broke out in the city and left it a devastated ruin; the number of casualties is unknown. The Treaty of Lausanne, signed in 1923, replaced the Treaty of Sevres. The borders defined in this treaty have generally held, although conflict in the region has never ceased.