Arthur Eddington was committed to testing Einstein's General Theory of Relativity during the 1919 Solar Eclipse, not only to remove all doubts about the theory but also to demonstrate the value of scientific internationalism. But the British Army was determined to send him to the Front. Eddington faced the greatest challenge of his life: proving his opposition to violence and his dedication to science were both a matter of conscience. Conscientious objectors in Britain could be sent to prison if their claims were rejected by local tribunals. Many were sent to solitary confinement, while others were put to hard labor. This prisoner is standing on a stool to get a glimpse of the sky. 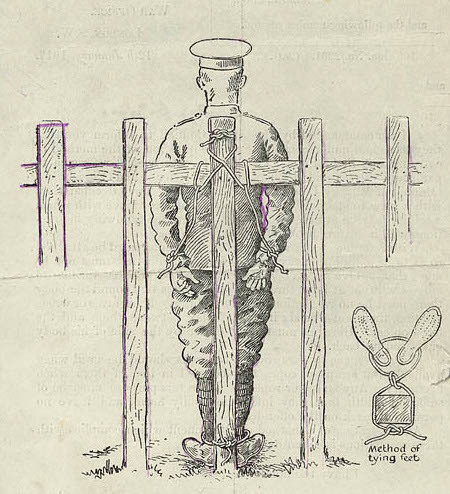 Some COs were subjected to field punishment. Field punishment was introduced in 1881 following the abolition of flogging in the Army--so I guess that's a good thing? The punishment was applied to soldiers who disobeyed orders, which included COs who had been denied official status and continued to refuse to fight. Men would be tied up to a fixed object for up to two hours a day. 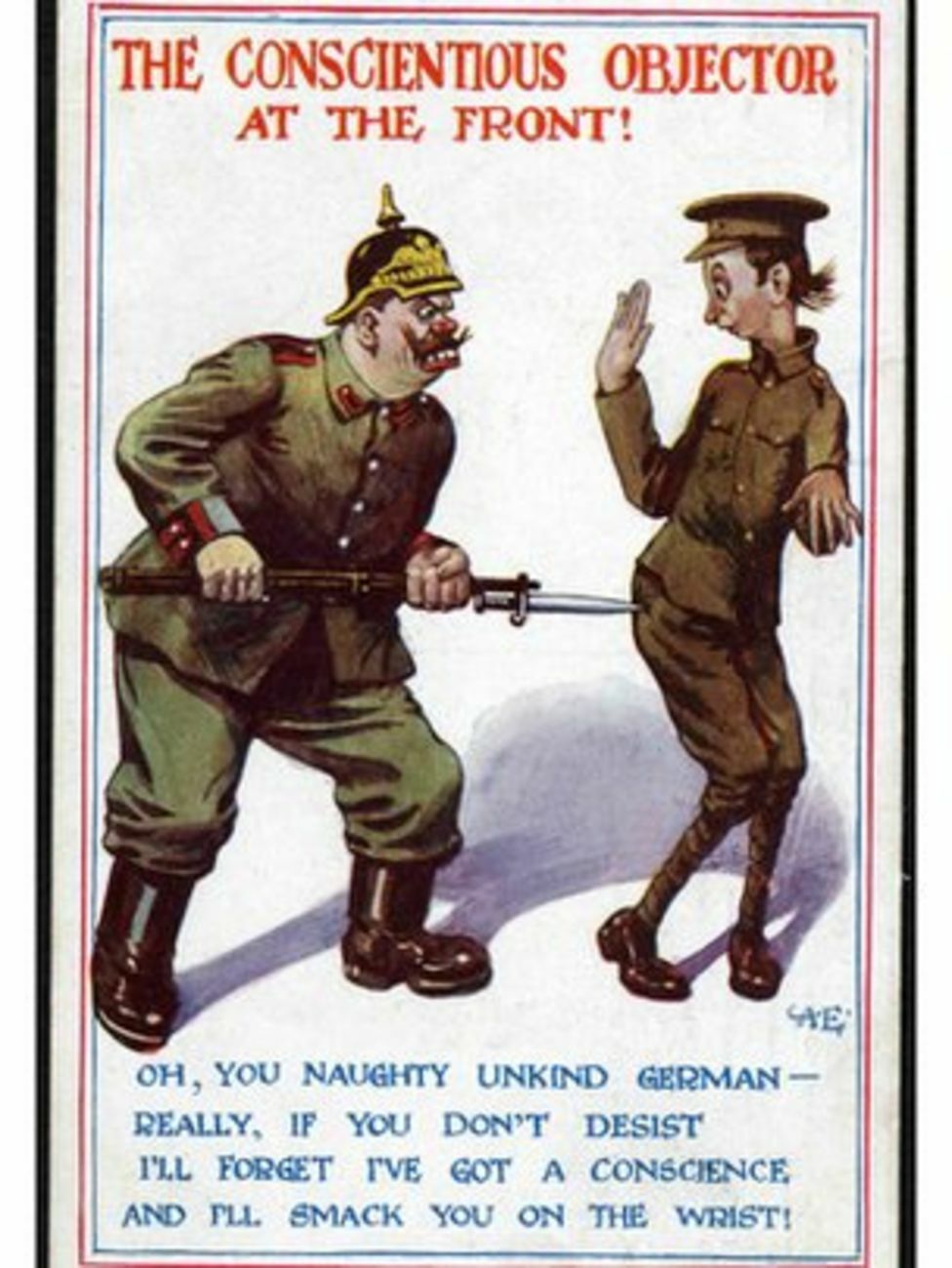 Conscientious objectors were despised by the general public and often mocked in political cartoons. In this image, as in many, COs were depicted as unmanly cowards--as "sissies" with a major dose of homophobia. 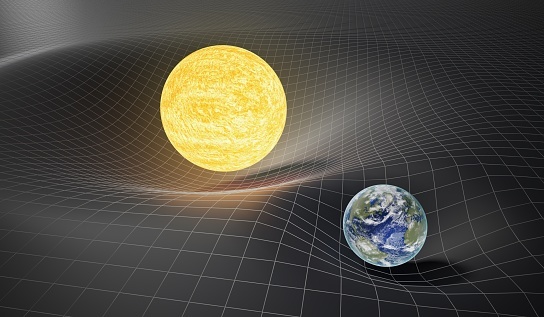 Einstein's General Theory of Relativity describes space as curving in response to the mass of heavy objects. The amount of the curvature depends on the mass of the object, so the Sun will cause greater curvature than the Earth. The Earth orbits the Sun because it is caught in the well of the Sun's gravity.

One of the problems with most explanations of relativity theory, including my own, is that they imply that massive objects sit on top of space. In fact, they existing within space. This graphic tries to represent this concept. 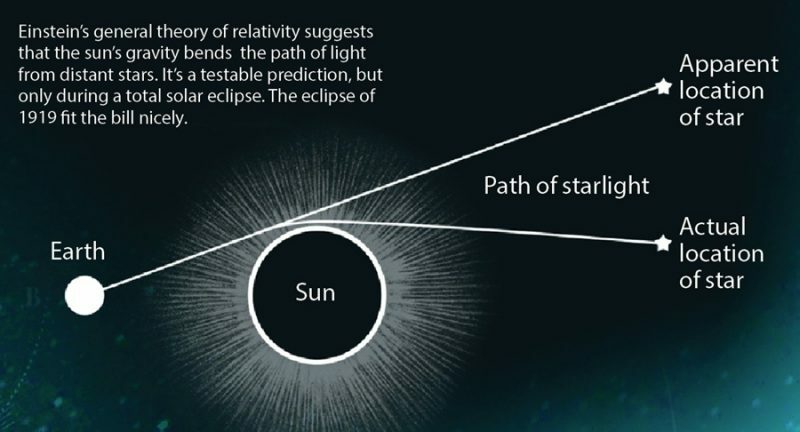 Eddington arranged for two expeditions to view the 1919 eclipse. One went to Sobral in northern Brazil and the other to Príncipe in the Gulf of Guinea. 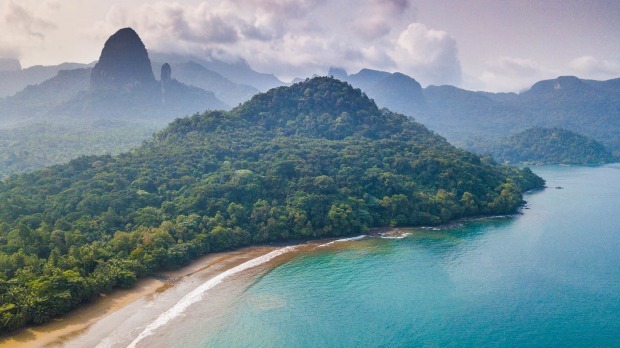 Príncipe is a gorgeous tropical island with misty mountains and white beaches. Eddington was amazed at the lush landscape and tropical fruits; he ate about a dozen bananas a day. Some fifteen years before Eddington arrived, the world learned that the cocoa plantations in Príncipe, which primarily supplied Cadbury's Chocolate, were worked by enslaved laborers kidnapped from Angola. The Portugese government promised to stamp out the practice, but political instability meant that these efforts received little attention. It is unclear in 1919 if Eddington saw free or enslaved laborers at work. 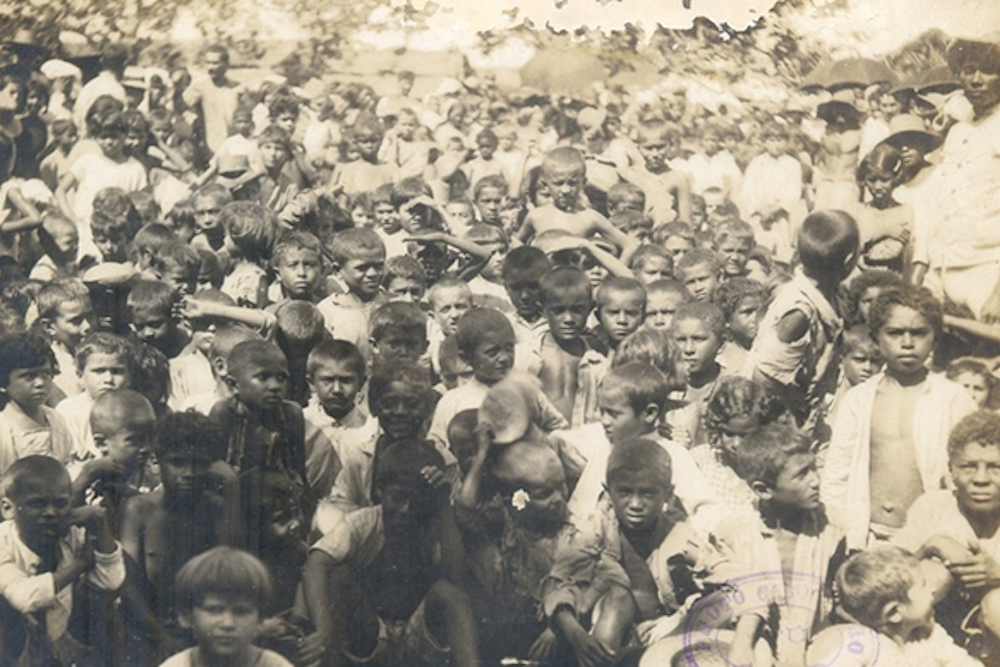 Northern Brazil, meanwhile, had been struck by a devastating drought in 1915 that killed hundreds of thousands of people. Many of those who survived fled the region, but the government feared they would cause instability if they arrived in Brazil's cities. What can only be called concentration camps were established and people were forced to live in them, as seen here. The drought was beginning to lessen in 1919, but the region was struggling. The light from the Hyades had been traveling about 153 years when it reached Eddington's telescope. Scientists now know that at least one of the stars within the cluster has three planets, one roughly the size and composition of the Earth. It is considered unlikely any advanced life exists on the planet, but anything is possible. This is one of Eddington's original photos of the eclipse. It has been scanned, and the stars that he was measuring are circled and labeled. You can see that the stars are incredibly dim and hard to spot even when pointed out. 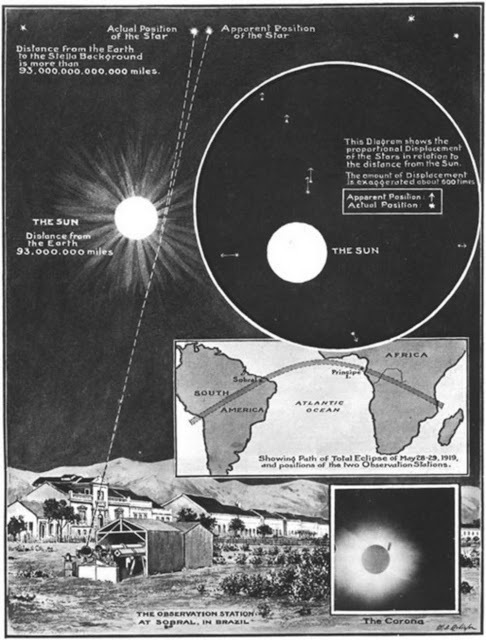 The announcement by Eddington and Dyson caught the world's attention and newspapers struggled to make sense of the discovery. The Illustrated London News did a fairly good job of explaining what the astronomers were looking for. The New York Times, on the other hand, was more bombastic that clear. I can only imagine readers were perplexed by this announcement, which seems at pains to tell everyone that (a) no one understands what has happened but (b) you don't need to worry about it. I suppose with everything else going on, readers did like having that reassurance.

The bit about "A Book for 12 Wise Men" refers to a story that circulated widely at the time. Supposedly, Einstein had gone to a publisher about writing about book about his theory, but the publisher replied that since only about 12 wise men in all the world would understand it, there was no point in publishing. This story seems to have been completely made up but got a lot of traction in the years to come. (Also, apparently only men of science were more or less agog. No word on the women of science, who, while small in number, did exist.) 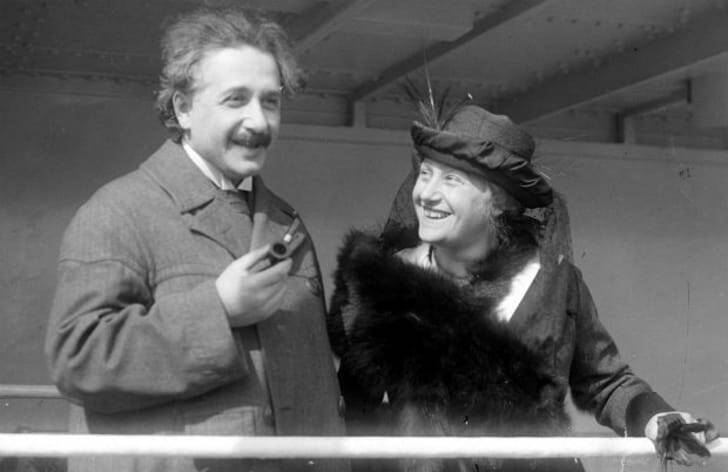 Einstein made his first visit to Britain in 1921. He toured the United States first (a tour he found exhausting and "horrendous" because of all of the press attention) and then journeyed to the UK on his way back to Germany. In this image, he and his wife Elsa stand on deck during their journey. Einstein met Eddington for the first time on this trip, but I haven't found any photos of the occasion. 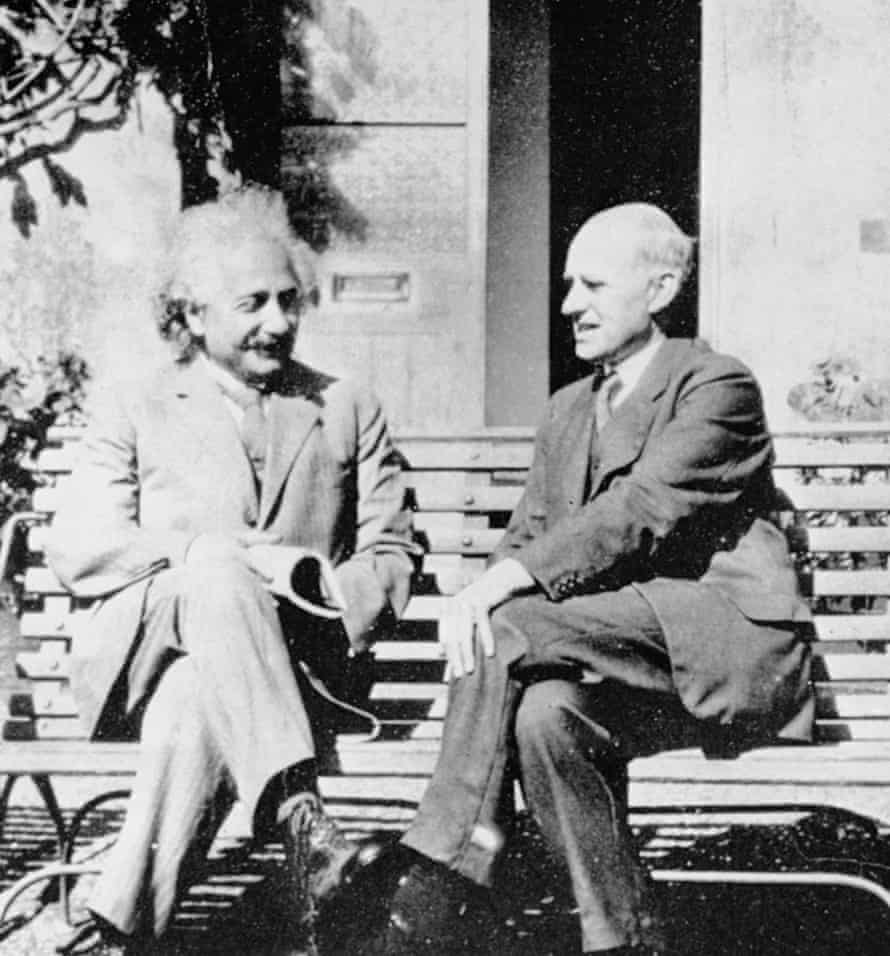 Einstein made multiple visits to Britain over the years and often met with Eddington. Here the two men sit and talk in 1930. I don't know where this photo was taken, but I wonder if they are at Eddington's house in Cambridge. His sister Winifred found great joy in her garden. 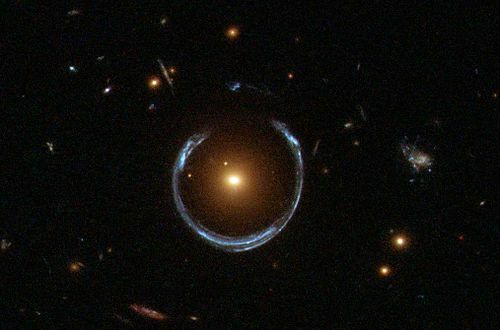 The Theory of Relativity as been confirmed and reconfirmed in the last 100 years. The distortion of light by large masses is well known today and described as "gravitational lensing." It has become an important tool in modern astronomy because it allows astronomers to study objects that are incredibly far away. It also provides a way to measure the mass of distant galaxies and therefore to estimate the amount of invisible dark matter within. You can read more about this in the sources I've linked to below.

This image shows one galaxy distorted into a ring that appears around a galaxy positioned directly in front of it. 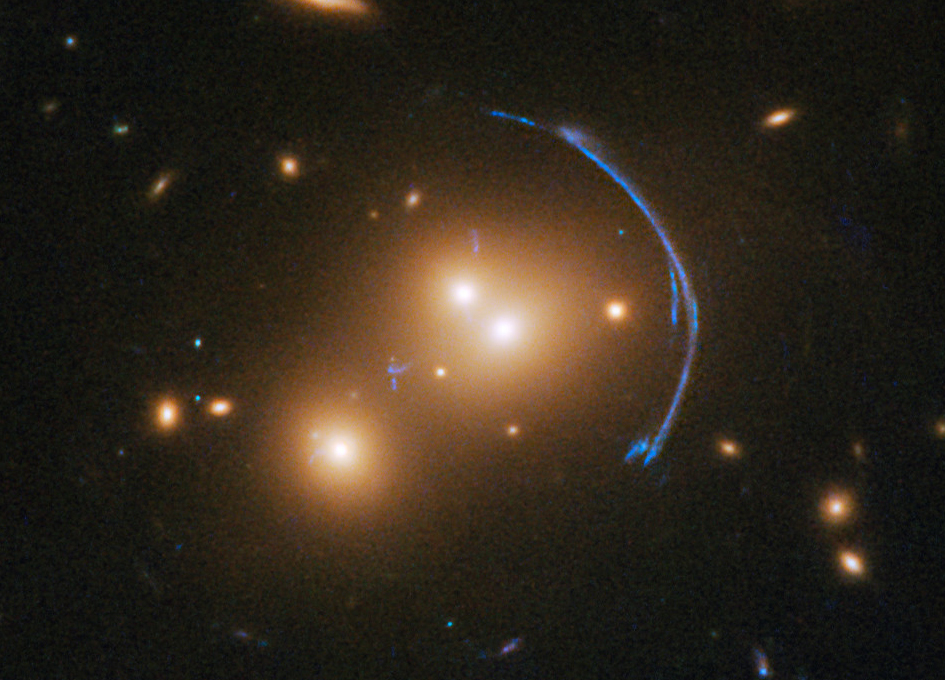 Here is another example of lensing. The blue curve is the light of a galaxy located behind the bright yellow galaxies, its light distorted by their mass. 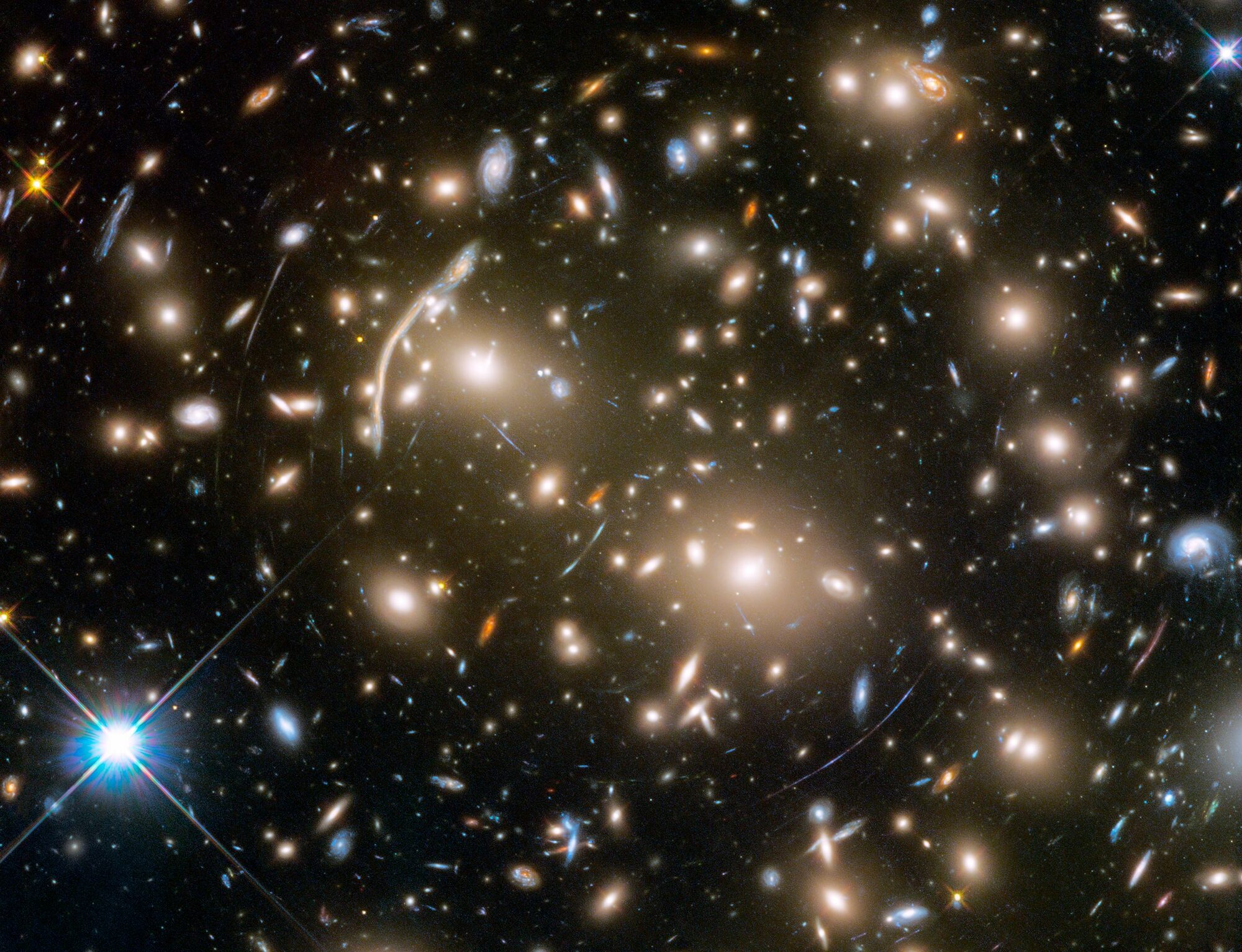 This amazing image from the Hubble telescope shows multiple examples of lensing. The stretched out and arced lines of light are distorted images of far-away galaxies. Some galaxies might even appear more than once as their light is split and sent along different paths. Eddington could have had no idea how dramatic the effects of lensing could be, or how important they are for modern astronomers.

I hope you will take the time to watch this video of Neil Gaiman reading his poem about Arthur Eddington. (The actual poem begins at about 4:18.) You can also read along on the Brain Pickings website. Warning, there is one NSFW word in the poem, but I think you all can handle it.

It captures so much about Eddington--his passion, his reticence, his brilliance, and, perhaps, his desperate need to keep hidden one essential part of his identity, his homosexuality.