The world has been obsessed with the tragedy of the Romanov family for more than a century. It's easy to forget that the Tsar's family were among hundreds of thousands of people killed in the Revolution as well as in conflicts that swept across Eastern Europe. These conflicts would have lasting implications for the entire world. I have really struggled to find a map that shows what I want a map to show. None of them really focus on exactly what I'm focusing on, alas. But, this is one of the best I've found.

This map is dated to the end of 1918. Notice the purple stripe that goes all the way across central Siberia--that's the Trans-Siberian Railway and the territory controlled by the Czechoslovak Legion. Eventually, the White Army would travel along the railway with the Czechoslovaks and fight the Red Army.

The dark blue areas labeled "1" are areas where Allies invaded and seized territory. The reddish-brown area in the west is the territory controlled by the Bolsheviks. OK, here's another map--and you're going to say, "That's not even in English!" No, it's not, but work with me here. Just refer to the previous image. This map is a year or so later than the previous one. The Trans-Siberian Railway is the black and white line crossing the entire map. Those red arrows along the line show the path of the Bolsheviks moving against the Legion and the White Army as they retreat back to Vladivostok.

Notice the dark red striped area in the upper west. That's the Bolshevik-controlled territory, and you can see from the red arrows how the Red Army moved out of this stronghold and across the entire country. Ukraine is the lime green area on the far left of the map. It was handed over to Germany in the treaty of Brest-Litovsk, but Russia reclaimed it. The borders on this map reflect the final size of the new USSR by 1922. It's not hard to see the Romanov daughters as individuals. You can find biographies of each young woman online and learn all sorts of details of their lives. Here you see Tatiana seated, with Maria, Anastasia, and Olga from left to right. Similarly, Alexei is recognizable across history as a little boy whose life was shadowed by an incurable and painful illness but who liked to play tricks on his sisters and always wanted a bicycle.

In contrast, the many victims of the Red Terror, and the simultaneous White Terror, are difficult to discern as individuals.

I found photos from the Terror, but I'm not going to post them here. They are horrifying. Allied troops, including British, French, Japanese, and American soldiers, were sent to Vladivostok in the far east and Archangel north of St. Petersburg. French and British troops also fought in southern Russia. This photo depicts American units marching through Vladivostok.

The Allies never sent enough men to make a real difference in the conflict, and they were withdrawn after having done little more than offend the Russians. The Allies took their own sweet time returning the Czechoslovak Legion to their newly formed homeland; the last troops weren't evacuated from Vladivostok until early 1921. The Legion was incredibly frustrated by the delay. This is a cartoon from a newspaper operated by Legion troops . It shows one last soldier standing along the Sea of Japan waiting for a ship home; it's dated, facetiously, 1980. 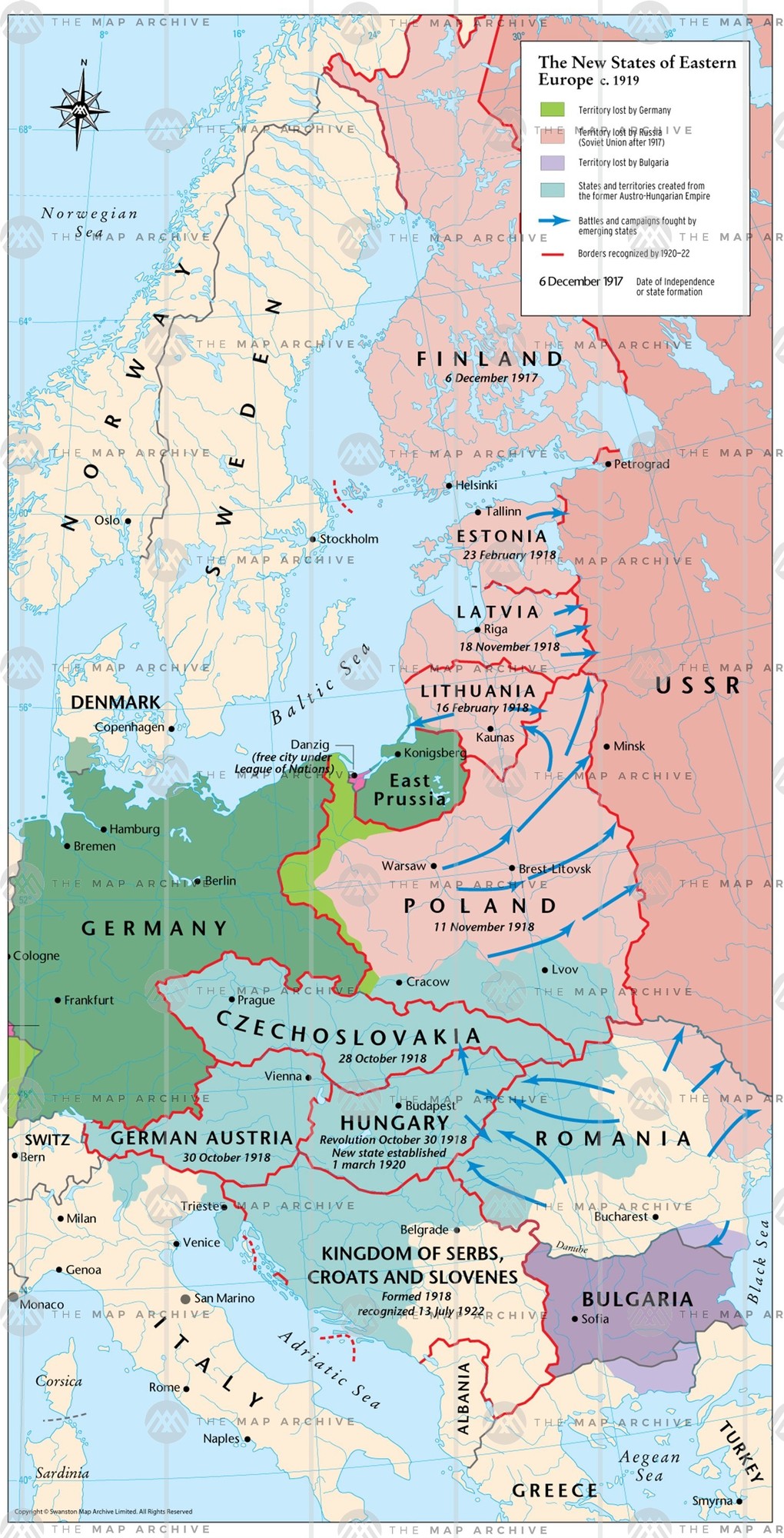 This map shows the new nations created after the war in eastern Europe. Finland, Estonia and Latvia achieve independence from Russia. Poland was combined from portions of Russia, Germany, and the Austria-Hungarian empire. Notice the pale green strip extending to the Baltic Sea; that's the Polish corridor, that left East Prussia separate from the rest of Germany. Dividing up territory in Eastern Europe was difficult and contentious. Self-determination had made it seem easy, but who "owned" a city like Cieszyn in Upper Silesia? The region had been controlled by multiple states over its history and was claimed by the Poles, the Czechs, and the Germans. Cieszyn (its Polish spelling), also known as Těšín in Czech and Teschen in German, was divided down the middle by the Paris Peace Conference, a solution that satisfied no one. Here you can see a guard station hastily erected on the international border in the middle of town.

Another contested territory in eastern Europe was the Sudetenland; those are the dark brown portions on the map. While traditionally part of Czech territory, they were largely inhabited by ethnic Germans. The Paris Peace Conference sided with the Czechs and gave the land to the new Czechoslovakia, to the fury of the Germans. The Nazis would never let the perceived injustice of the Sudetenland die.

Many of the sources for this week are the same as last week, and I won't repeat them here. The following are a few sources that are particularly relevant to this episode.