The I.W.W. was a tough, militant, radical union, and its very existence terrified business owners, factory bosses, and the entire U.S. government. Since its founding, the law had been out to get the Wobblies. In 1919, as a record number of Americans went on strike for better wages and working conditions, would the union be able to help them? Would the union even survive? 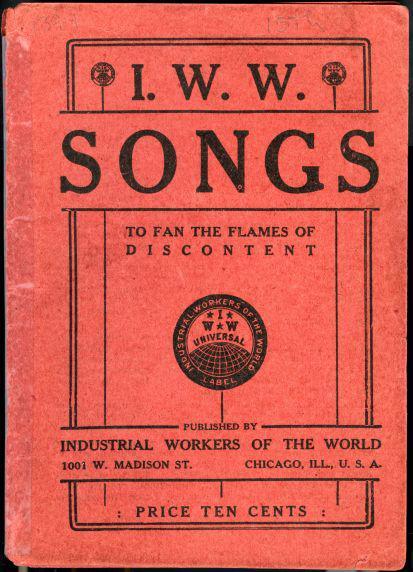 The Wobblies were so famous for singing that they repeatedly published their lyrics in "The Little Red Songbook," which contained Wobbly sayings and organizing advice as well as songs. 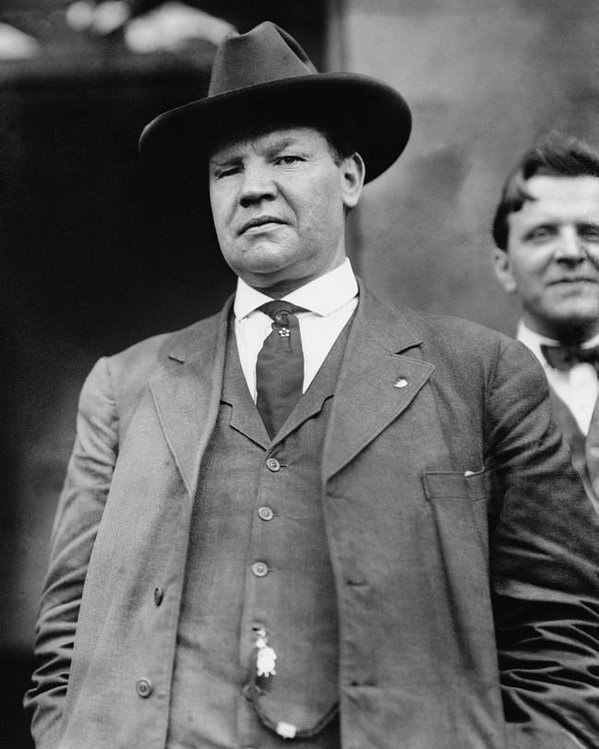 "Big Bill" Haywood was tough and physically imposing, but he had a big heart and a gift for communicating with workers. 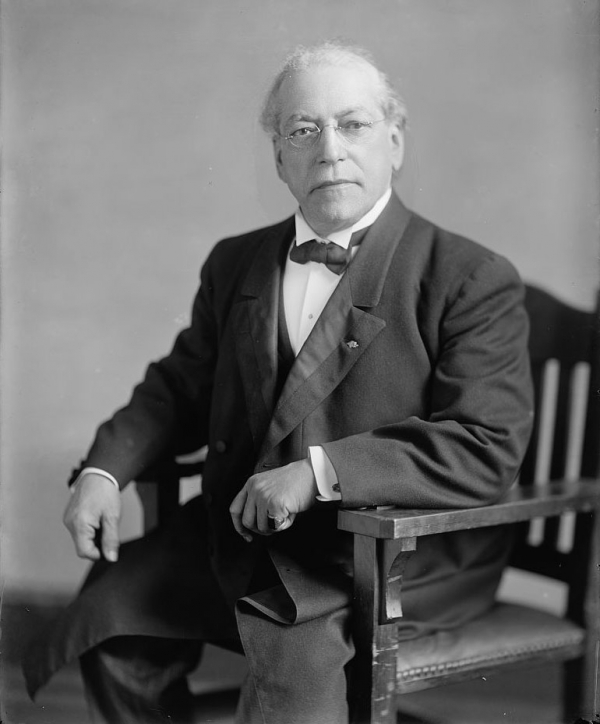 Samuel Gompers was leader of the IWW-rival the American Federation of Labor. He cultivated a reputation for the organization as reasonable and cooperative--and achieved many results for his members. 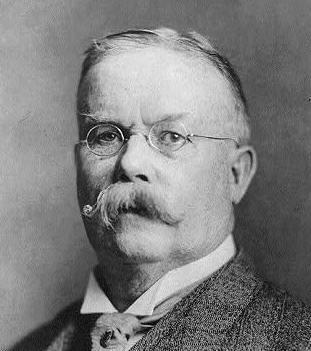 Pinkerton agent James McParland took over the investigation of the murder of former Idaho governor Frank Steunenberg, and his handling of the main suspect was, shall we say, questionable. McParland was one of the country's most famous Pinkerton agents, known for his infiltration of the Molly Maguires--so famous, in fact, that Arthur Conan Doyle modeled a character in his novel The Valley of Fear on McParland and imagined a conversation between Sherlock Holmes and the real detective. 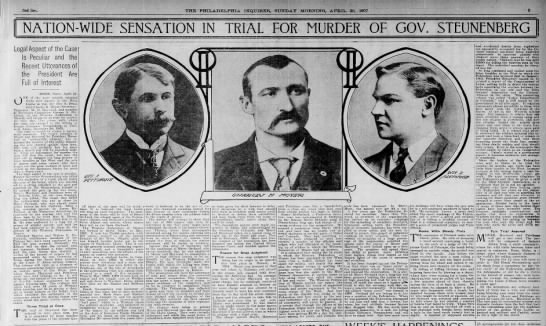 The trial of multiple Wobbly leaders for the murder of Frank Steunenberg garnered nationwide--even international--press attention. 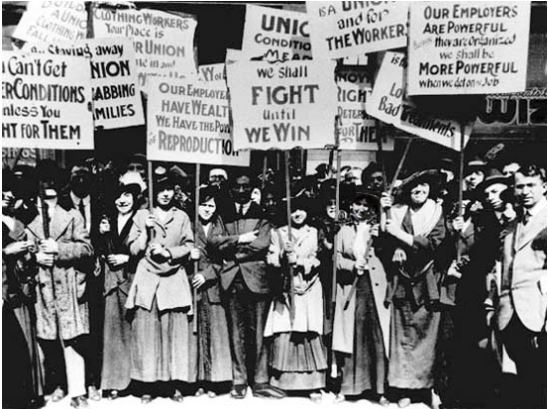 The most successful IWW-led strike was the "Bread and Roses" strike in 1912 in Lawrence, Massachusetts. Many of the strikers were women, seen here on the picket line. 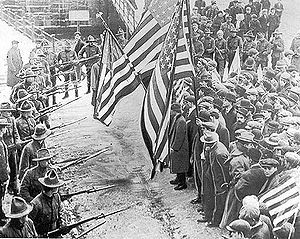 IWW organizers urged the strikers to remain peaceful no matter how much the police and state militia threatened them. The strikers generally remained non-violent, although in one confrontation between the two groups a young woman was shot and killed. It remains uncertain who was responsible, but IWW organizer Joseph Ettor was placed on trial. No evidence connected him to the murder, and he was aquitted. 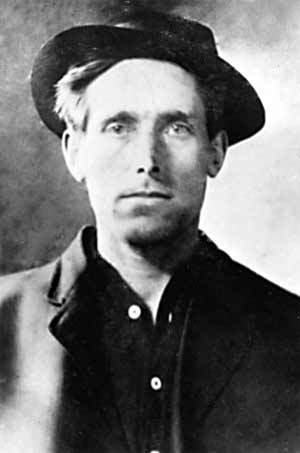 Joe Hill was an uneducated, unskilled Swedish immigrant with a remarkable gift for songwriting--in an adopted language, no less. He was convicted of murder and executed by firing squad in 1915. His death can be seen as matter of perverse stubbornness in the face of officialdom--he refused to explain how he had received a gunshot wound on the night a former policeman was killed. Or it was a blatant miscarriage of justice in which a man with no connection to the the murder victim became a convenient scapegoat. Or perhaps it was both. In any case, Hill became a martyr to the Wobbly cause. This remarkable image shows striking miners and those considered their allies being loaded up into cattle cars on the morning of July 12, 1917 by the sheriff of Bisbee, Arizona and the self-appointed Citizens' Protective League. The men were told if they attempted to return to town, they would be killed. The cattle cars were abandoned across the New Mexico border, leaving the men without food or water. Sheriff Harry Wheeler was unconcerned that his actions might have been illegal. "It became a question of 'Are you American, or are you not?'" he said. 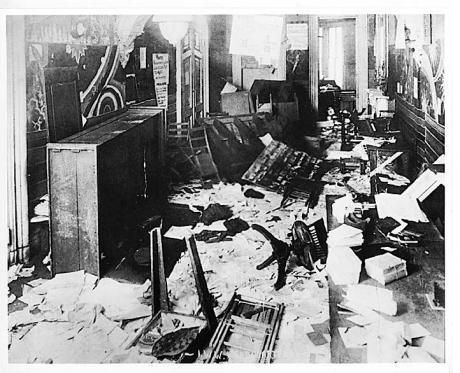 In September 1918, 48 IWW offices across the country were raided. This image shows one office after the raid.

More than one hundred IWW members and leaders were tried under the Espionage Act. Most were convicted and received sentences of up to twenty years. 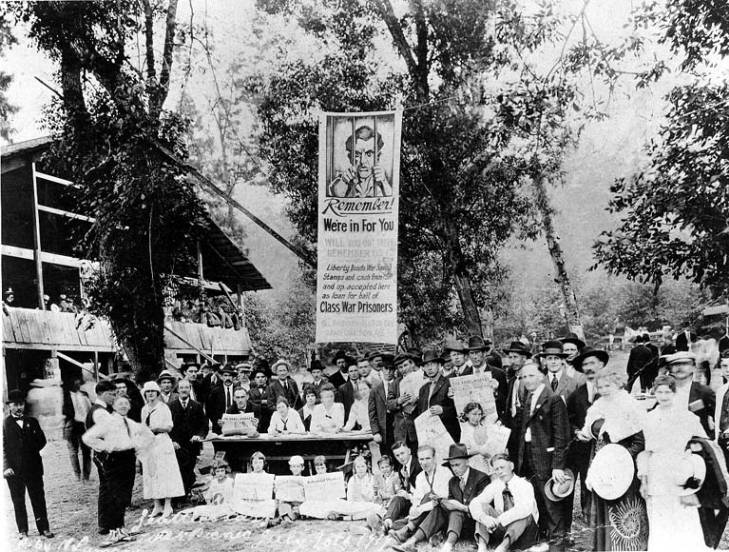 The union spent most of 1918 and 1919 raising money for defense and appeals. This was a Wobbly fundraising picnic. The banner reads, at the top, "We're in For You" and asks for money for the "Class War Prisoners." When the unions of Seattle called a general strike in January 1919, the mayor was so terrified he requested U.S. Army troops, including machine gun companies, be sent to his town. When the Boston Police went on strike in September 1919, the public was terrified they would be helpless at the hands of criminals. The recently elected governor Calvin Coolidge sent the state militia to town and earned nationwide praise for ensuring law and order. Coolidge is seen here inspecting militia members. The steelworkers strike was pushed from the bottom up and never had the full support of the unions who were supposed to organize and lead it. The factory owners convinced workers that the cause was hopeless and they should go back to work. Notice that this advertisement, which ran in a Pittsburgh newspaper, is in mutiple languages to reach immigrant workers. When the town of Centralia, Washington planned a parade for the first anniversary of Armistice Day, rumors swirled that the IWW hall would be attacked. The rumors were so prevalent that the Wobblies issued a statement requesting that the townspeople avoid violence and turn to law enforcement if they believe the IWW is guilty of any crimes. This photo shows the parade stepping off, before violence erupted at the IWW hall. 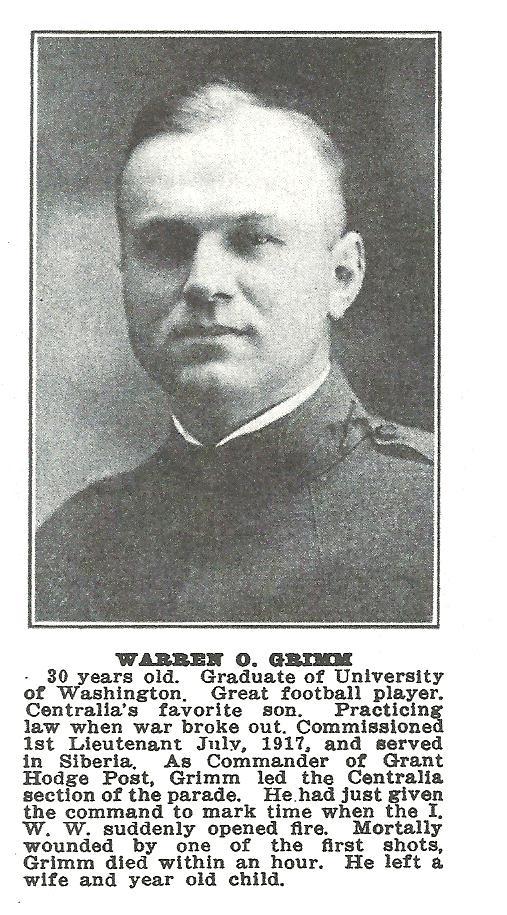 Warren Grimes had served with the U.S. Army in Vladivostok and had a well-earned fear of Bolshevism. He was a local hero, and when he warned about the IWW, people listened. Grimes was one of the first shot in the conflict between the IWW and the American Legion. Exactly what happened that day remains under dispute. It is not disputed that a mob of Centralia townsfolk dragged Wobbly member Wesley Everest out of jail and hanged him on a nearby railway bridge.

"Solidarity Forever" by John H. Chaplin, recorded by Pete Seeger on the album "If I Had a Hammer: Songs of Hope and Struggle," Smithsonian Folkways Recordings, 1998.

"The Popular Wobbly" by T-Bone Slim, recorded by Eric Glatz on the album "IWW Rebel Voices: Songs of the Industrial Workers of the World," Universal Music Group, 1984.

"Bread and Roses" from a poem by James Oppenheim, sung by Bronwen Lewis, from the movie "Pride," 2014.

"There Is Power in a Union" by Joe Hill, recorded by Joe Glazer on the album "Songs of the Wobblies, Smithsonian Folkways Recordings, 1977.

"The Preacher and the Slave" by Joe Hill, recorded by Utah Phillips on the album "Classic Labor Songs from Smithsonian Folkways Recordings, 2006.

"Union Burying Ground" written and performed by Woody Guthrie, recorded in the 1940s and released on the album "Struggle," Smithsonian Folkways Recordings, 1976.

"Bread and Roses" from a poem by James Oppenheim, sung and recorded by Bronwen Lewis, 2014.