By 1914, the temperance movement had achieved significant gains in its goal to outlaw the sale of alcohol in the United States. But every push for nationwide prohibition had failed. Would the war--and the accompanying anti-German hysteria--give the Anti-Saloon League enough power to cross the finish line? Was a golden age of sobriety waiting on the other side? The Temperance Movement began in the 1840s and gained significant momentum through the rest of the century. Women were major leaders in the movement, with many pledging to never let the lips that touch liquor touch theirs. Unfortunately, this seemed to have little effect. 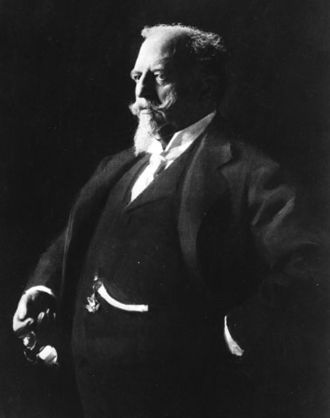 In the second half of the 19th century, an influx of immigrants from beer-loving countries, including Germany and Ireland, dramatically increased the consumption of beer in the United States. German brewers arrived to meet the demand. The most successful among these brewers was Adolphus Busch. As owner of Anheuser-Busch, he built a massive, vertically integrated operation that controlled every aspect of beer production and distribution, from mining the coal that fueled the brewery to building the refrigerated railcars to deliver the beer to Anheuser-Busch owned saloons. Saloons were more than watering holes. They were hubs for the entire community and played important roles in the lives of patrons, especially when those patrons were recent immigrants.

Pictured here is a saloon in Wisconsin. Notice the little boy sitting at the table with his own beer glass. Boys often accompanied their fathers to saloons. Women and girls, however, were not welcome, and a woman who stepped in a saloon ruined her reputation. Here's another saloon, this one from Michigan. In a saloon, men could meet friends, participate in local politics, eat a free lunch, take a bath, find a job, get his mail and pawn his watch. By 1900, most saloons were "tied houses." That is, they were tied to, if not actually owned by, breweries. In exchange for agreeing to sell only one brand of beer, a barkeeper would receive cash for his licensing fees, an inventory of glassware, and the furnishings for the saloon, including the pool tables and the mirrors on the walls.

This photo shows a Miller bar in Chicago.

Temperance activists believed saloons were evil through and through. This cartoon, probably from the mid- to late-19th century, shows children desperately calling for the father, who stands in his natty coat and top hat at the bar. The bartender is a grinning skull, and another skull atop crossed bottles decorates in the bar. In the background, a brawl has broken out. Clearly, nothing good happens at a saloon! Women's rights activists in particular believed that alcohol was the cause of domestic violence. In this illustration, a drunken man takes a swing at his wife as his children cling to his legs. Many woman suffragists believed that prohibition would stop violence in the home. The Anti-Saloon League became a force to be reckoned with by organizing all of the anti-alcohol groups. The League was led by Wayne Wheeler, a genial midwesterner that author Daniel Okrent noted resembled Ned Flanders. In fact, Wheeler was a passionate, focused organizer with a backbone of steel who could make or break political careers. 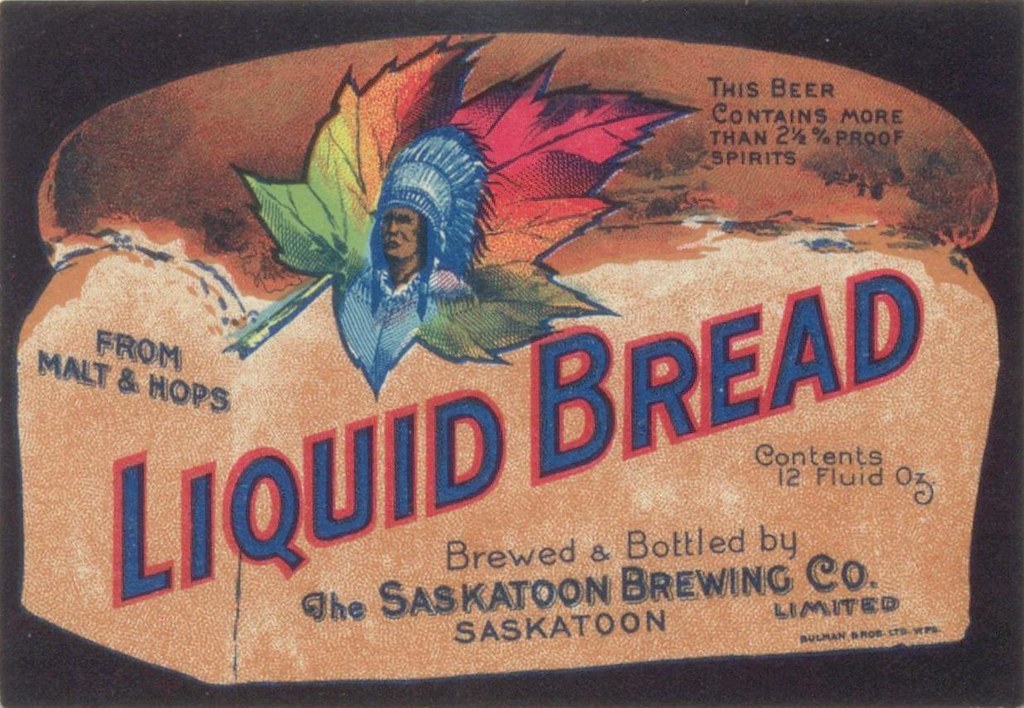 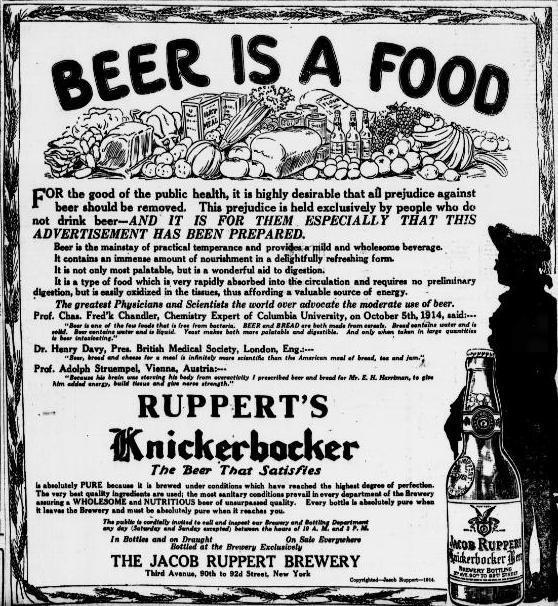 Knickerbocker Beer ran ads declaring "Beer is Food" and claiming that beer was not only "a wonderful aid to digestion" and a "valuable source of energy" but also "a mainstay of practical temperance." An Anti-Prohibition coalition produced this ad, showing a fat and happy baby drinking a stein of beer. No one was convinced by any of these campaigns. 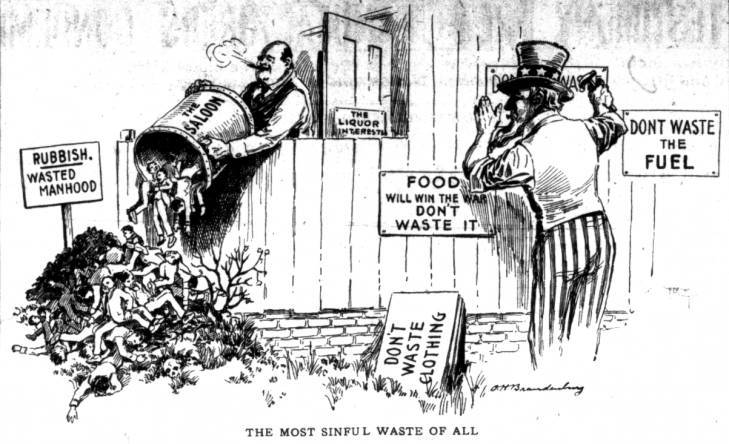 In this cartoon, Uncle Sam puts up posters calling to save food and fuel while the saloon tosses out barrels not only of goods but also of "wasted manhood." "Non-essential" was an insult during the war--anything non-essential to winning the war was useless and to be despised. Here a woman clad in an American flag hurls the word at a fat man identified as "Booze." In late 1917, riding the wave of anti-alcohol sentiment, the Dry alliance pushed the 18th Amendment through Congress. It went to the states for ratification.

The Anti-Saloon League coordinated the ratification fight with an attack on the United States Brewers Association and an immigrant association it had long backed, the German American Alliance. The League convinced the Senate, and the American people, that the Alliance and the Brewers were under the control of the Kaiser and enemies of America.

A Senate sub-committee investigated the charges and seemed to prove all sorts of underhanded dealings. It's true that the Brewers had played dirty by bribing politicians and and paying off newspapers, but their aim had been to stop Prohibition, not lost the war to Germany. No charges ever came out of the subcommittee, but it didn't matter. Americans had found the Alliance and the Brewers guilty in the court of public opinion. In this heady atmosphere, the 18th Amendment was rapidly ratified by all but two states on January 17, 1919. In one year, the amendment would go into effect. The most important job for Congress was to pass legislation defining the terms of the 18th Amendment (what constituted an "intoxicating beverage"?) and creating enforcement mechanisms. The man responsible for the bill was Andrew John Volstead, a man so strait-laced he did yardwork in a coat and tie. Volstead's bill passed in October, but then Wilson vetoed it. Americans were shocked. Wilson had never even committed on Prohibition. Congress, fed up with the president after the long and ugly League of Nations fight, overturned the veto two hours later. The Volstead Act called for the creation of a new Prohibition Unit to stamp out illegal alcohol. But the agents were to be paid measly salaries and the majority lacked any law enforcement training or experience. They were, inevitably, corrupt. Criminals also spent 1919 getting ready for Prohibition. Arnold Rothstein, who providing the funds to throw the 1919 World Series, organized a comprehensive smuggling operation to bring liquor from Europe to the United States. He was only one of many crooks and bootleggers getting their ducks in a row for the following year. Brewers had to find a way to make do. Anheuser-Busch sold malt extract, brewer's yeast, and Bevo, a soft drink. It was not a success. Companies also found creative ways to exploit loopholes in the Volstead Act. It was perfectly legal, for example, for wineries to condense grape juice down to semi-solid block known as a "grape brick." These bricks were sold along with careful instructions on how not to mix the juice with water to make wine. You wouldn't want people to accidentally break the law, now would you? Homebrew kits came with similar instructions. Moonshine operations sprang up across the country, with different regions developing their own recipes and reputations for quality or lack thereof. Pictured here are stills seized from moonshiners in Colorado. The metal was sold for scrap. It's likely by the time this photo was taken, the moonshiners had already begun their next batch. As the clock wound down to January 17, liquor stores began selling out their inventory. People stockpiled as much as they could afford--since, as far as they knew, alcohol would be illegal forever in the United States. Here a line extends out of the store as men line up to buy a last few bottles. It was going to be a long, dry time.

Music from this Episode